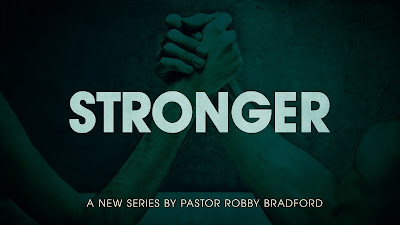 This morning’s message started down the course of looking at the spiritual baggage we received from Adam and Eve.  I am looking forward to this series!

Check out the video of the message and the outline below.  Join us online or in person at First Assembly Community Ministries for the rest of this series and learn more about it here.

STRONGER—We Are All Weak
Genesis 3:1-6  “Now the serpent was more crafty than any of the wild animals the Lord God had made. He said to the woman, ‘Did God really say, “You must not eat from any tree in the garden”?’ 2 The woman said to the serpent, ‘We may eat fruit from the trees in the garden, 3 but God did say, ‘You must not eat fruit from the tree that is in the middle of the garden, and you must not touch it, or you will die.”’ 4 ‘You will not certainly die,’ the serpent said to the woman. 5 ‘For God knows that when you eat from it your eyes will be opened, and you will be like God, knowing good and evil.’ 6 When the woman saw that the fruit of the tree was good for food and pleasing to the eye, and also desirable for gaining wisdom, she took some and ate it. She also gave some to her husband, who was with her, and he ate it.”
BIG QUESTION:  What has entered every family in the world with sin?
SHAME
A broken sense of shame has visited all people because of sin.
Genesis 3:7-10  “Then the eyes of both of them were opened, and they realized they were naked; so they sewed fig leaves together and made coverings for themselves.  8 Then the man and his wife heard the sound of the Lord God as he was walking in the garden in the cool of the day, and they hid from the Lord God among the trees of the garden. 9 But the Lord God called to the man, ‘Where are you?’ 10 He answered, ‘I heard you in the garden, and I was afraid because I was naked; so I hid.’”
Isaiah 61:10“I delight greatly in the Lord; my soul rejoices in my God.
For he has clothed me with garments of salvation and arrayed me in a robe of his righteousness, as a bridegroom adorns his head like a priest, and as a bride adorns herself with her jewels.”
BLAME
A broken habit of blamearises from sin.
Genesis 3:11-13 “11 And he said, ‘Who told you that you were naked? Have you eaten from the tree that I commanded you not to eat from?” 12 The man said, ‘The woman you put here with me—she gave me some fruit from the tree, and I ate it.’ 13 Then the Lord God said to the woman, ‘What is this you have done?’ The woman said, ‘The serpent deceived me, and I ate.’”
SELFISHNESS
Sin has distorted and magnified the sense of self, creating isolation and identity–crisis.
Genesis 3:20 “Adam named his wife Eve, because she would become the mother of all the living.”

Genesis 5:2“Male and female created he them; and blessed them, and called their name Adam, in the day when they were created.”

Genesis 3:16 “To the woman he said, ‘I will make your pains in childbearing very severe; with painful labor you will give birth to children. Your desire will be for your husband, and he will rule over you.”
Response—What broken tendency do you see weakening your relationships?