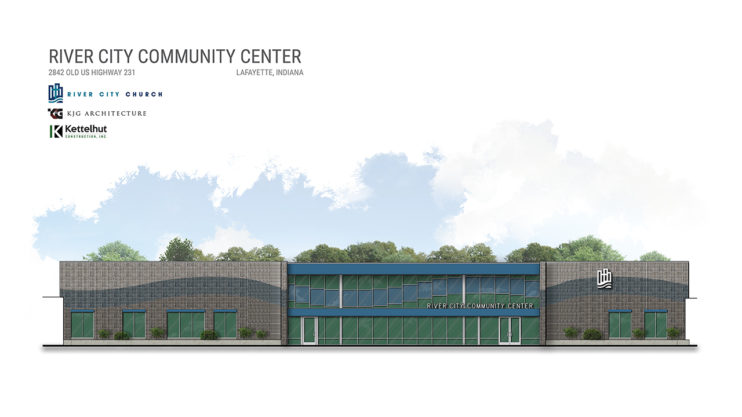 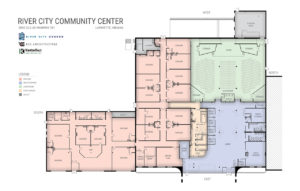 If you’ve wondered what is happening with what used to be the Payless grocery store on Old US 231 in Lafayette, Indiana, you can see from these plans a concrete picture of what is going to be put into place.

River City Community Center came into being in December 2015 when businessmen donated the property to River City Church, a gift that was appraised at nearly $2.5M.  This donation came with existing commercial leases in tact, making the property self-sustaining.  The plan has been to develop the old grocery store into a community-serving space.  After collecting donations from the congregation and applying for grants with various organizations for the past nearly three years, work on the 35,000 square feet has begun.  River City Community Center expects to be able to have a grand opening next summer.

Plans for the space include an expansion of STEAM Academy, a preschool and childcare center that offers focused education to children in the areas of science, technology, engineering, arts and mathematics.  STEAM opened in 2016 in cooperation with Adventure Station, a childcare center started by and housed in River City Church.  The expansion of STEAM will take up about a third of the old Payless, giving STEAM about 20,000 square feet total once it is finished and will have a capacity to serve more than 200 children.  STEAM opened in the community center strip, just south of the old Payless space, in August 2017 and now serves more than 90 children and their families.

Beyond this space, the floor plan above shows a planned commercial kitchen and a lobby that will have numerous functions, including serving meals to the public and to the children at STEAM and Adventure Station daily.  The kitchen will also serve the multi-purpose room shown as an “auditorium”, and can accommodate more than 350 diners at a time.

Planned in the lobby space are several conference rooms and other smaller rooms where community services will be extended to people in cooperation with organizations in Tippecanoe County.

Additional plans involve River City Students moving into the space and conducting its activities in this space.

If you have an interest in knowing more or exploring partnership possibilities, please contact Terry Gilbert, Community Center Director, at (765) 474-1432 or at gilbert@rivercity.info.