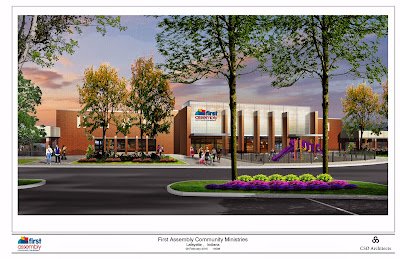 The developing First Assembly Community Center (formerly South Plaza) at the intersection of Beck Lane and Old U.S. 231 on Lafayette’s south side just received a boost that leaders acknowledge only God could have engineered.

Since the summer of 2014, the investors did a lot of work to repair and bring the legal and physical state of the property to a functional place.  Finding new tenants, painting the exterior, demolishing the interior of the old Payless grocery store and repairing the HVAC along the old strip mall of 68,000 square feet were among the things done by the investors and the church.

If that were the whole story, it would be great, but the full story reveals just how significant a gift the church has received.  The building is expected to appraise for more than $2M and will have an annual income of some $200,000 that will help the property and community center, planned in the old Payless site,  to be self-sustaining.

“We never would have guessed that a property we were praying about across the street for years would someday be given to us as a revenue-generating property,” says First Assembly’s lead pastor, Robby Bradford.

For now the church is thrilled with this development and is continuing their plans for developing the inside of the community center that will serve children and people of all ages.  One of the ideas that the group is working on presently is getting a center for STEM (science, technology, engineering and math) up and running.

“The way that God has provided is an answer to prayer, and there are more developments coming in 2016,” says Community Center Director, Wayne Peercy.

If you would like more information about how you can donate funds, resources or skills to this important project in Lafayette, please call director Wayne Peercy at (765) 474-1432, ext. 142 or email him by clicking here.  If you would like to donate to this project, click here today and designate it to “Community Center”.  100% of the funds received will go to renovation projects at the community center.