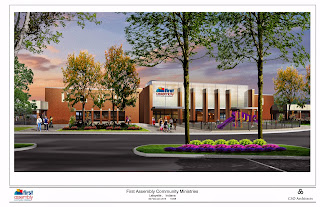 Check out this article, posted in the Journal and Courier, Lafayette, Indiana’s newspaper about the new community center director that First Assembly Community Ministries has hired!

I am personally so pleased with this addition and am happy the Peercys are serving on the staff of FACM again.

First Assembly Community Ministries named former missionary Wayne Peercy as director of its developing southside community center, officials announced Friday.
The center, situated in the former Pay Less Super Market on Old U.S. 231 South, is scheduled to open in stages beginning fall 2016.
It will offer a youth ministry, day care and an event venue for public use, Peercy said.
Other uses will be decided, he added.
Prosper Property Group LLC, a group of church investors, purchased the property last July for $570,000, and the church acquired it in mid-October.
Peercy, a Lafayette native, returned to the staff in February after serving as missionaries in South Africa for nearly 20 years.
“I believe that the door of serving in South Africa closed and this door opened and it was ordained by God,” he said. “It seemed to be the job that I was meant to be doing coming back to the states from missionary work.”
The former teacher graduated from Purdue University in 1979 with a Bachelor of Arts and Master of Science in education and taught at Dayton Elementary School before joining the pastoral staff at First Assembly in 1986.
From 1986 to 1995, Peercy served as the church’s director of children’s ministries, adult Christian education director and oversaw the singles ministry. He also was instrumental in founding the church’s Christian school.
In 1995, the Assemblies of God World Missions sent Peercy and his wife, Delight Peercy, to South Africa as missionaries.
While in South Africa, they developed a children’s ministry training center, established a shelter for abandoned babies and toddlers, many of whom were infected with the HIV virus, and helped Zulu people in need.
The Peercys adopted two South African girls, Tolu and Rejoice, from the Tswana tribe in 2003. The family returned to Lafayette last year.
“With Wayne Peercy’s leadership, we have a promising future ahead at the site for helping people of all kinds,” said Robby Bradford, senior pastor, in a statement.”