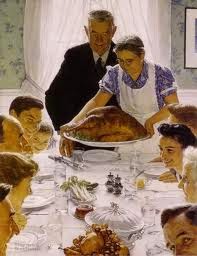 Almost no family resembles the ideal one seen in the painting to the left.

Every family has some drama.  You know, that colorful cousin who shows up with a different person every year at Thanksgiving.  The uncle who swears the end of the world is coming on the sixth of June.  The mother-in-law who tries to push her politics down everyone’s throats, as they’re just trying to enjoy some egg nog.  The brother whose incessant race-baiting or crude language leaves everyone feeling uncomfortable.

Regardless of where you are on the family drama scale, I have just a few thoughts to maintaining a modicum of peace during holiday family gatherings.  While other things might be said, here are a few.

Extend the same kindness you would to a business associate.  In the place you work, you likely aren’t as open as might be with people in your family.  At work, you’re focused on getting along, accomplishing things, and probably being happy while you do it.  When you’re getting ready to gather with people who may challenge your sense of serenity or calm or who will ultimately bring forward memories or experiences that are unpleasant, try to put on your unflappable professional reserve. Just like you don’t expect for your manager or your colleague to fulfill emotional or other ideals, don’t put those expectations on your family either.

Keep looking ahead.  Family gatherings are often a time to look back with nostalgia.  If the family drama is thicker than gravy, you may wish to do your best to talk about things in the future.  Do your best to avoid voicing disappointment with others or with breakdown that has happened in the family dynamics.  It’s probably wise to steer clear of others’ divorces, business failures, unplanned pregnancies, etc.  Keep the focus on what is positive in the future.  If you have to look back with the group, do everything you can to point toward bright moments in your collective rearview mirror.

Respond softly.  Maybe you’ve heard that Bible verse from Proverbs.  “A gentle answer turns away wrath, but a harsh word stirs up anger” (15:1 NIV).  There’s a lot there.  Gentleness, not harshness. Calmness, not sarcasm.  Understated, not over-the-top.  There is likely a moment in every scene of a family drama where you have the chance to turn down the volume or turn it up.  Recognize you have likely added to the noise.  This year, take every opportunity to turn down the negative emotions with words that are easy, gentle, and soft.

Don’t dig up buried bones.  Many families love to tell the same stories over and over and over. They sometimes unknowingly repeat the hurtful episodes of one’s past in an effort to laugh or relive what happened years ago.  If you have any say in it, don’t bring up what is past or dead or over.  Don’t bring up the time that so and so was brought home by the police.  Don’t bring up how someone in the family flunked out of college or used to live with someone who turned out really awful.  Leave things that are dead and buried in the grave.

Don’t play Oprah at Christmas dinner.  Sometimes, we have the mistaken idea that we can fix the emotional malaise of our family at a family gathering.  This is probably a significant misread.  Keep it light, keep it fun.  Use a conversation starting game or a fun activity to keep the conversation going.  If your family wants to fix it, it likely won’t ever happen at a dinner between the of November and the start of January.

These are some initial thoughts.  What are some of yours?