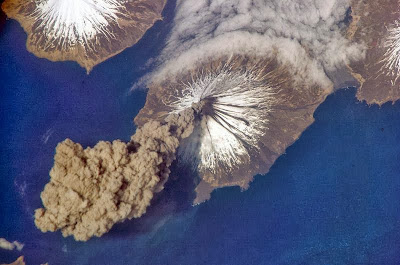 This is a picture from space of a volcanic eruption.  Have you ever known someone with a personality like that?  A person who it seems adds DRAMA to every situation they enter?

What is drama exactly?
Drama is what happens when people add emotion to events, people, words, decisions or circumstances that lead to erroneous conclusions, relationship breakdown, misunderstanding, anger, bitterness, unforgiveness, gossip and many other negative outcomes.

Drama is that thing that creates intrigue and speculation about people’s motives.  Drama is that element that causes us to see things that aren’t there.  Drama is what happens sometimes when we fantasize in the shower or elsewhere where we think no one can hear us about what we’d like to say to that person who’s got us worked up.

I’ll be posting a couple of times on the subject of drama this weekend.  In order to draw a contrast between the drama queen or king you might be, let’s reflect for a moment on what Paul says in his letter to the Philippians in the New Testament:

Philippians 4.6-8  “Do not be anxious about anything, but in every situation, by prayer and petition, with thanksgiving, present your requests to God. And the peace of God, which transcends all understanding, will guard your hearts and your minds in Christ Jesus. Finally, brothers and sisters, whatever is true, whatever is noble, whatever is right, whatever is pure, whatever is lovely, whatever is admirable—if anything is excellent or praiseworthy—think about such things.”

Paul’s describing what we should fix our hearts and minds on.  It seems like the very opposite of drama.  I think I’d say it like this:

When I fuel drama in my heart and mind, I give Satan everything he needs to grow strongerin my life and cut myself off from God’s life-giving ways.

I’ve let drama go sometimes in my own life and relationships and the results have been disastrous!  Maybe you know someone who’s life is dominated by drama, but right now, focus on yourself and your own habits of mind and heart as they relate to drama.

What heightens drama?
My observation here would be that the biggest contributor this kind of unhealthy drama is low self–esteem.  That’s because people with low self-esteem end up looking for and projecting their own expectations to be treated or regarded poorly by others wrongly on others.

Beyond that, lack of communication is sometimes the source of drama.  That is to say, sometimes, particularly when we are distant from others and have little or not enough direct communication, we can begin to imagine or assume or judge the wrong things about people we have relationships with.

Gossip, negative reports repeated that are usually based on speculation, incites drama in our lives.  Often, a talker’s tendency to talk about others is an attempt to draw us into drama.

Pessimistic expectations of others can heighten drama in our lives.  When we have less than positive regard for others and expect that people’s motives are wrong or no one can be trusted or believe that people always will let you down, you’ll be prone to let drama rule your life and relationships.

Well, this is just a start on the subject of drama.  I’ll be back later this weekend with another post on this subject I see clearly manifested in life everyday.

How have you seen drama take off in your life or in the lives of others?