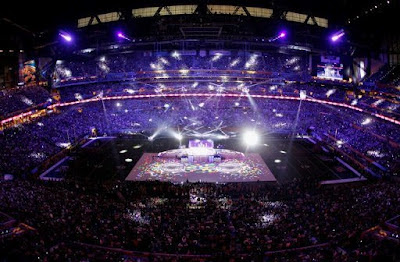 I was watching with over 100 million other people.  Friends of mine were tuning in all over the world.  The biggest media event of the year–The Super Bowl 2012.


At the heart of it was the Material Girl who came on to the stage at half-time with the most glittering, light-filled, amazing spectacle that money can buy.


As she was carried onto the mid-field by Roman soldiers with  the procession, costume and pageantry that hearkened back to Egypt and Babylon, her 1990 hit “Vogue” cranked up as she was flanked by dozens of dancers and performers.  The words kept coming up, “Strike the pose / There’s nothing to it / Vogue”.


I kept wondering if she was mocking her audience in some way.  She’s the one striking the pose.  She’s the one as famous as all the celebrities the song mentions–Ginger Rogers, Gene Kelly, Fred Astair.  In the end, I was convinced she was sending a message to the world in her much celebrated appearance…the words were right in the song–


But maybe what was most fascinating of it all was how her show ended.  The glittering spectacle with the 50 year-old pop singer who had her height of fame when I was in high school moved to images of unmistakably Christian spirituality.  “Like a Prayer” featured a choir and pulled an amazing vocalist along side Madonna who belted out pristine harmonies in classic black gospel style.  Madonna fell to her knees and seems to dance and shake with her hands raised, mimicking what just about any Pentecostal has seen in church.


“Life is a mystery,
Everyone must stand alone.
I hear you call my name,
And it feels like home.”


Then, she disappeared in a vapor that enveloped her, as she dropped through the floor.


Whether you saw it or not, the whole performance evoked for me, in the midst of the most extraordinary example of fluff, glitter and flash, a sense that she longs for what the gospel of Jesus holds.  And she did on the world’s largest stage!


There is One who calls our name, and that sense of isolation and loneliness is the mystery created by our own sinful choices.  Madonna’s singing about what nearly everyone can relate to, and she’d really love it if she could somehow connect with the God behind her parodied choir and lifted worship style in her final song.


So what about you?  What did you see in her performance?